by Sasha Cohen Fan | About Sasha | 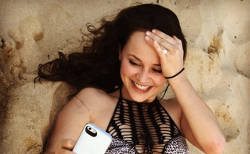 SASHA COHEN’s star quality shines brighter today than when she won a silver medal for the United States with a gutsy performance at the 2006 Olympic Winter Games in Torino, Italy. She is an icon of her sport but also holds worldwide influence in other realms including fashion and nutrition, leading the way in promoting a healthy physical and mental daily regimen that stretches across all demographics.

“I concentrate on living in the now,” said Sasha, who was born Alexandra Pauline Cohen. It is the same philosophy that has molded Sasha’s life since taking a hiatus from competitive skating following her impressive win at the U.S. Championships and medal wins at the Olympics and the 2006 World Championships.

And it is a philosophy that continued to motivate Sasha as she looked toward competing at the 2010 U.S. Championship. Needing the challenge that competitive skating provides, Sasha took a break from touring and her other professional demands — her credits including commercials, movies and prime time television — to return to competition in the 2009-10 season. She was fourth at nationals.

Sasha studied a semester with the intensive Moscow Art Theater at Harvard University during her break from competitive skating. She has also taken speech classes and a variety of other acting classes, many from Hollywood’s top coaches. She is routinely given scripts to peruse.

Reality shows frequently ask Sasha to participate. Project Runway, with Heidi Klum, was a big success when contestants were asked to make a skating dress for Sasha. Sasha has put touring first, which limits her exploration of more movie and TV projects

When Sasha tours the nation and the world with Stars on Ice, her signature fashion designs are as highly anticipated as her sensational skating programs and music selection. Her one-of-a kind dresses are dynamic in color, fabric and style, and are unique to her sport.

World-renowned photographer Mario Sorrenti, who spotted Sasha skating at a rink in New York City, photographed her for the high-fashion French V magazine. Sasha has also been featured in Seventeen, Sports Illustrated, Vogue and other international and national photo spreads in both sport and lifestyle publications.

Sasha is as much an ambassador for her charities, including the Figure Skating in Harlem organization where she serves on the board. Recognizing that young people are influenced by what they see in public, Sasha thrives on being a positive role model.

Her autobiography “Fire On Ice,” published by HarperCollins after her thrilling appearance in Torino, is a testament to Sasha’s disciplined lifestyle. The book sold out of its hardback printing while soft cover was in high demand well before its release date.

Good things don’t fall into Sasha’s lap but she makes good things happen. Sasha is living in the moment but is in complete control of her life — she wouldn’t have it any other way.

Movies: My Fair Lady, Baraka and
Bridges of Madison County

TV Shows: Gossip Girl and
Sex and the City